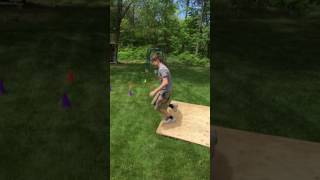 I was asked to write an article recently about teen fitness. Which was great since I was researching ways I could host a more physically active birthday party for my newly 12 year old son. Synchronistically two other clients of mine asked me if I would train their teen daughters. I love training teens and kids! I feel it's important to keep our children active, especially since the rate of teen obesity is on the rise. Whenever attempting to get your teen to be fit and hea

I am empowered, I am disabled. Which is true for you?

I recently watched a video about a 3 year old girl with a leg prosthetic trying to climb a man-made rock wall. The video was very popular, thousands of viewers watched as she grappled with the lack of traction, the difficult logistics and how, no matter what strategy she used she failed to reach the next grip on the wall until……….. she did! The entire time she kept trying to climb the wall we the viewers, were cringing, waiting, hoping someone, anyone, would come up and hel

Time or Life Management for Health

Time Management When I was a teenager and then newlywed and I had a simple schedule it was easy to make fitness one of my top priorities. As I got older it wasn’t my age or physical state that prevented me from working out as much as it was my responsibilities. Work and my commute took up a good percentage of my time (try 90%) then there was… well sleep, that was another 5% and then I had the remaining 5% to myself to workout. Sound familiar? That last 5% was a nebulous

What Will You Master This Month?

Spring Sprang Along with my Bra!! LOL

Do Fear and Anxiety Rule You?

WHAT DID YOU SAY? PERCEPTION IS EVERYTHING

Meditation instead of Medication for Weight Loss

What Does Your Waistline Say About You?